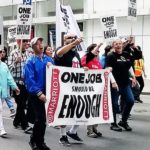 Organized labor has an opportunity to play an important role in the upcoming selection of a presidential candidate in the Democratic Party’s primaries and the eventual November 3, 2020 U.S. presidential election. The stakes couldn’t be higher, not only for the future of the labor movement but for the entire U.S. working class.

The Iowa, New Hampshire and California Democratic primaries are more than a year away. (The Iowa contest is February 3, 2020 and early voting in California will begin that day; New Hampshire is set for February 11.) But the volume of commentary and speculation regarding the selection of a candidate is already at a high level. Perhaps because of the general panic about Trump and the obvious mandate to defeat him, many union leaders appear to have lost their class perspective on the election. Very few comments we’ve seen reflect the importance of taking a strategic approach to the 2020 political process and using the primaries as an arena for struggle with the corporate Democrats.

Regardless of who the Democrats pick, the primaries should be viewed as an opportunity for the labor movement to gain strength. That’s why it’s imperative for labor to define and advance working class values and priorities before making any union endorsements.

Well before the primaries begin, our objective should be to unite around a forward-looking political program and provide members and elected union officials as much time as possible to evaluate the candidates based on these positions. Absent a bold, well-articulated working-class program, labor’s agenda risks being crushed by the Democratic Party’s traditional pro-corporate and discredited neo-liberal ideology.

The labor movement has been the subject of oft-written obituaries over the last thirty plus years. But our organizations soldier on as the largest force for positive change not funded by billionaire- and millionaire-backed philanthropic foundations.

Despite historic low union density (private sector membership is now down to 6.5% of the workforce), labor and our allies are continuing to have great successes. For example, through its innovative “Fight for $15” campaign, SEIU has succeeded in winning significant raises in the minimum wage at the state and municipal level for millions of low-wage American workers. The hotel workers union just conducted a multi-city strike against corporate giant, Marriott. Workers won a resounding victory with sizable wage increases, no cuts in health care, new protections against sexual harassment and innovative policies to deal with workload and scheduling.

The wave of teacher strikes in states like West Virginia, Oklahoma, Arizona and beyond with workers wearing “Red for Ed,” demonstrated the power of organized workers in states that are thought of as conservative and where Trump carried the popular vote in 2016. On January 14, Los Angeles teachers followed in their footsteps by striking and waging an heroic battle for the future of public education. Finally, labor helped power the recent Blue Wave that flipped 40 House seats and gained a record setting 9 percent margin in the aggregate Congressional popular vote nationwide. Labor’s money, ground troops and organizing expertise were crucial to winning these victories.

In 2016, Hillary Clinton was the anointed choice of the corporate elites. Many labor unions also rushed to endorse her because they saw no alternative. But when Bernie Sanders announced in May of 2015, there was a groundswell of support for him in the ranks and disgruntlement with union leadership’s early endorsements of Clinton. Thankfully, six national unions and over 100 local unions had the courage to endorse Sanders. That labor support and nearly 50,000 union members who were part of the Labor for Bernie network helped propel Sanders to win over 13 million votes in the Democratic primaries. The Sanders’ candidacy and his continuing activism (along with Our Revolution and other grassroots insurgencies) have pushed an anti-corporate, populist agenda that has now made issues like Medicare for All and free college tuition mainstream. Their work has also bolstered the fight for immigrant rights and is contributing to rebuilding a vibrant movement against militarism and war.

Partly because of Sanders’ success and the revulsion against Trump, several candidates will emerge in 2019-20 carrying part or most of his progressive platform. Inevitability, labor unions won’t coalesce behind one candidate. Given the disastrous results of the early Clinton endorsements, there should be no rush to judgment this time in the endorsement process.

STAND ON PROGRAM, NOT PERSONALITIES

If labor is to gain strength while weathering the onslaught of candidates and confusion, union leaders will need to:

And while labor unions may have to “agree to disagree” on particular parochial planks, they should strive for broad unity along these lines:

UNITE THE WORKING CLASS; BUILD POWER IN THE PRIMARIES

Armed with a program — and the support of the members — unions can enter the primary election fray and winnow-out genuine pro-labor candidates from the corporate Democrats. (A perfect opportunity will be to hound and challenge any candidates who support charter schools and education privatization.) Candidate forums and endorsement questionnaires are essential tools in this process. Unequivocal support for labor’s strikes, contract and organizing campaigns should also be used by unions as a key benchmark for earning an endorsement. Our experience in the 2016 Democratic primaries showed how these tools provide an important route to genuinely building working class electoral power. For instance, last time around Bernie Sanders’ support for the Verizon strike proved to CWA members and many other workers his sincerity and credibility as a candidate.

The eventual effort in the Democratic Party to defeat Donald Trump in a “united front” with others is not diminished by this engagement but is, in fact strengthened. Look how far the Medicare for All campaign has penetrated the political discourse because of Sanders’ candidacy in 2016. Similarly look how the newly elected, anti-corporate House members are setting the agenda in the House of Representatives now run by Democrats.

LABOR CAN PLAY A UNIQUE ROLE IN WINNING BACK TRUMP VOTERS

Labor unions are membership run, democratic institutions with their leaders subject to votes of the membership. As such, union leaders must succeed in uniting a broad array of member viewpoints. That makes labor organizations an important force to challenge the Trump phenomenon with our members and especially with white male working class voters. Labor will be more credible in so-called “red states” if our leaders are armed with a program that speaks directly to the needs and interests of the multi-racial working class.

The natural diversity in union workplaces provides union members a golden opportunity to contend with their fellow workers who supported Trump. Often those eventual Trump supporters were originally Bernie backers in the primaries. Political scientists estimate that 12% of Sanders supporters in the primaries then voted for Trump in the 2016 general election. In a close election to be decided in a small number of swing states, the opportunity to win back Trump supporters should not be overlooked.

People’s Action is organizing in some “red” states with grassroots door-to-door organizing in rural areas. (See “Winning in Trump Country” here.) Labor unions can have the same positive conversations about race and class and the same possible effect with our members – but only if union leaders focus on issues and commit to having a genuine consultation with members. Early endorsement of a corporate candidate only because of “electability” will undermine the credibility of our message and spoil the opportunity for membership engagement. Nothing could be more instructive than our unions’ experience with the botched 2016 primaries and the disastrous election of Trump. Let’s not jump the gun that way again in 2020!

The authors are indebted to Tom Gallagher’s insightful political analysis in The Primary Route: How the 99% Takes on the Military Industrial Complex, Read Peter Olney’s review on the Stansbury Forum here; the book can be purchased here.

Rand Wilson is Chief of Staff at SEIU Local 888 and a former volunteer organizer for Labor for Bernie. Peter Olney is retired ILWU organizing director and a labor trainer and consultant.