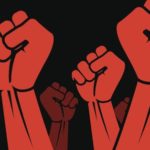 After 40 years of neo-liberal policies that uniquely punished Black communities, the rise of neo-fascist governments, and four centuries of forced servitude, theft and genocide, Black people around the world are once again rising up. The same corporations and military that uniquely harms Black people in the United States plays a role in repressing and killing Black people globally. Wherever you live, the police, the military, and men with guns serve to uphold hierarchies, preserve capital, and maintain various forms of oppression. We also know that patriarchal violence — whether it be at the hands of the state or individual people — continues to wreak havoc on the lives of Black people, especially women and LGBTQ people. Oftentimes, those first and most harmed are cis and trans women, children, and those regularly denied access to true safety.

Whether it is in fighting police brutality in the United States, Brazil, or Europe, or calling for an end to European control over western and central African economies, this is a historic moment that centers the legacy and ongoing work to defend Black lives.

This moment in time reminds us of the Soweto Uprising that took place more than 50 years ago when Black youth rose up in defiance of white supremacy and were met with a deadly police response. Their stance permanently shifted the momentum of the anti-apartheid struggle for the next two decades. We are also reminded of June 19, 1865, when enslaved Africans in Galveston, Texas were notified of their freedom two years after the emancipation proclamation. This day is known as Juneteenth.

In the legacy of both of these events, this Juneteenth 2020 in the USA, we will be gathering by the tens of thousands in Washington, DC and by the millions around the world, to defend Black life, mourn our dead, celebrate Black resistance and recommit to building and winning a new world. We are the children of uprisings, a generation standing on the shoulders of those that came before us, and a people united to usher in a new world.

We call on our siblings across the world to join us on June 19th. You can do this by taking action in your home or in your community. If you plan to join us please share what you are doing by going to sixnineteen.com. You can also email partners@m4bl.org.

Representatives of organizations may endorse the call to action here.