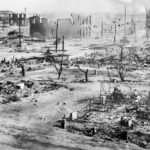 One hundred years ago, a white mob attacked the black neighborhood of Greenwood in Tulsa, Oklahoma and in two days killed hundreds of people, burned to the ground every building, and left ten thousand homeless. The event began when Dick Rowland, a 19-year-old who shined shoes for a living was accused of attempting to rape a 17-year-old girl elevator operator that he had bumped into. Roland was taken to jail, and the Tulsa Tribune newspaper ran sensational, rabble-rousing articles that encouraged hundreds of white men to gather at the jail with the intention of lynching the young black man. In response, some 75 armed black men went to the jail to prevent his lynching. When a shot was fired, a gunfight broke out leaving twelve dead, ten white and two black. With that the riot erupted.

The Tulsa sheriff deputized hundreds of white men who were told to go home and “get a gun and then get a nigger.” The white mob of a thousand men went through the black neighborhood, including the area called Black Wall Street, said to be the wealthiest black community in America, looting homes and then setting them on fire, while shooting and killing an estimated 300 black residents. When the whites proved incapable of subduing the armed blacks fighting in self-defense, private planes dropped fire bombs on the neighborhood and the National Guard was called in. When the smoke cleared, Greenwood, an area of 40 square blocks, had been completely erased. Some 1,000 black people set up tents outside their old neighborhood and lived there. The insurance companies paid whites, but rejected all black claims. The courts accused no white men, but 57 black men were indicted for causing the riot.

Why had the white riot and the massacre occurred? The accusation of a black man looking at, touching, or befriending a white woman was often the excuse for lynching or for the many white attacks on black neighborhoods. The real reason for the massacre and other similar events was the growing presence, increasing wealth, and assertiveness of black people in America. The economic boom that accompanied World War I had led many black people to move from the plantations of the South to the North in the First Great Migration. Some had started small businesses and most had earned higher wages than in the South. Black soldiers returning from the war, had learned how to use guns and were prepared to defend themselves. Tulsa was a special case because oil had been discovered in the state, some of it under black-owned ground, which led to the rise of a group of wealthy black people, the city’s famed Black Wall Street. The attacks on Greenwood and other black neighborhoods and cities were intended to enforce Jim Crow segregation and disfranchisement in the South and the North, to prevent black people from accumulating wealth, and to strike fear into the hearts of the black working class.

Keeping the black working class down necessitated violence. Between 1900 and 1917, 1,100 black men were lynched. Equally serious was what African American historians John Hope Franklin and Alfred A. Moss, Jr. called a “pandemic of race riots” that started in 1895 and continued through the 1920s. The white race riots led not only to black armed self-defense, but also led W.E.B. DuBois and other black leaders and white allies to meet in Canada in 1905 to found the Niagara Movement, which later became the National Association for the Advancement of Colored People (NAACP), the country’s first national civil rights organization. Led by well-off blacks and white liberals, the NAACP used the courts in an attempt to stave off the lynchings and white mobs, but it would be another fifty years until the civil rights movement’s civil disobedience began to turn the tide. Racism remains endemic in America, and the struggle continues today with the Black Lives Matter movement that brought millions into the streets against police violence.