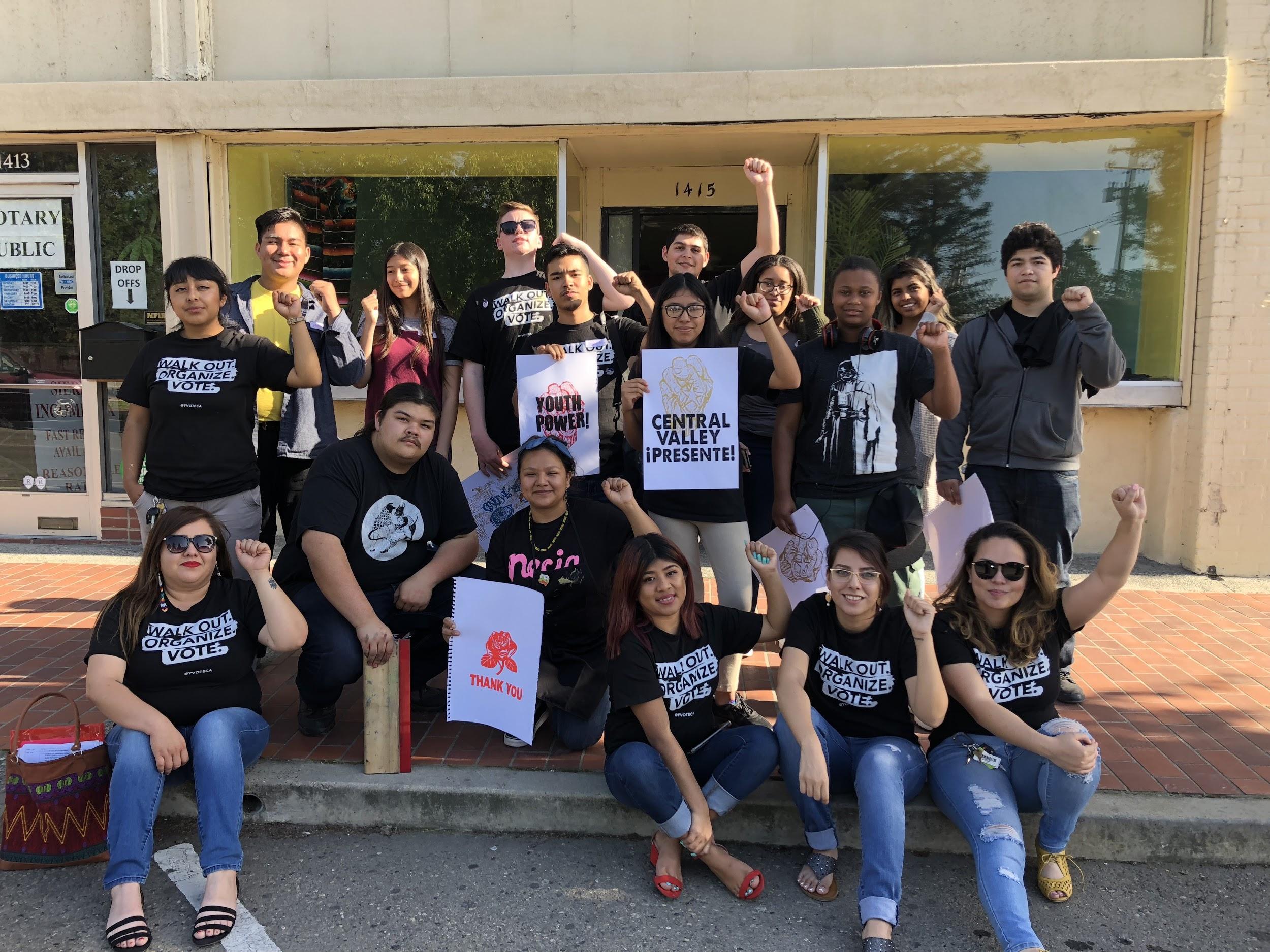 Driving down Route 99 highway, miles upon miles of flat land sprouting grapes, nuts, lemons, and tomatoes line the stretch of land next to the hot asphalt. Highlighted within this landscape of farmland and truck filled, busy highways are youth. Strong, beautiful, Black and Brown young people unapologetically organizing amidst big agriculture and quiet towns. They are organizing for a Central Valley that provides all its residents with what they need to be whole. These young people, full of wisdom and fire, are ready to reclaim the region as their own, creating from the soil rich land a movement that pushes forward their vision of a California for all. At the center of this energy and youth-led, transformative movement is 99Rootz.

In an election year, where the powerful work of grassroots movements can often be overshadowed by prime time news, there is an urgent need to lift up the story of 99Rootz. As a youth organizing project rooted in social justice, 99Rootz builds leadership pathways and safe growth spaces for young people in the small towns that surround Route 99 highway. Their work includes re-connecting youth with their culture, political education, electoral organizing, and voter registration. Working out of two offices in Sanger and Merced, Alicia Olivarez, 99Rootz Strategy Director and Crisantema “Crissy” Gallardo, 99Rootz Senior Organizer know firsthand the joys and struggles young people experience in the Central Valley. Alicia and Crissy were both born and raised in the region, left to attend university at Harvard and UC Berkeley respectively, then returned to their hometowns eager to help build a movement of young people of color transforming their communities grounded in culture. Crissy describes her life experience, which eventually saw her decide to leave her hometown Atwater for college:

“In Atwater, I always felt like there was never anything to do. Public transportation was pretty much non-existent so getting around to the “bigger” towns was hard. Monday through Thursday my immigrant parents worked in the fields and on Sundays, their only day off, we would go to mass and then grocery shopping. That was our routine. My older siblings got involved with drugs and gangs and law enforcement was constantly at my house. When I could hang out with friends, we would go to a local burger joint, Foster Freeze, a park, or to someone’s house to kick it. My friends and I all had dreams of leaving as soon as we could.”

“My older sister was murdered when I was sixteen and my older brother was in jail at the time. That moment made me feel like I was the last child that could do something to make my immigrant, farmworker parents proud. They worked really hard and their biggest dream was for one of us to make it to college. I felt like college was going to be my only way to escape all the pain back home and succeed. I left for UC Berkeley not knowing the difference between a UC, CSU, or community college. I was fortunate to find a support system composed of womyn of color. They helped me unlearn all the lies I was taught by the school system in the Central Valley, like if I spoke English well enough I would succeed and if I assimilated everything would be fine. My time at UC Berkeley challenged me to think for myself to find my own identity. Learning my true hxtory opened my eyes to the injustices impacting my family and community. My experience as a young person of color in the Central Valley and subsequent political education informs my work at 99Rootz. I am committed to helping create the resources I wish I had growing up.”

Alicia grew up in the quiet town of Sanger in a diverse community of immigrants, refugees, and young people building community together. Dubbed the “Nation’s Christmas Tree City” in 1949 by the U.S. Post Office, this otherwise jocular designation doesn’t encompass the problems residents face, including unemployment, lack of access to healthcare, environmental issues, and mass incarceration of youth of color as adults. Alicia decided to leave her hometown based on the direct impact that economic disparity had on her family:

“My neighborhood was made up of hard-working, largely immigrant, farm and packinghouse workers. This included my family who worked the surrounding fields. My parents could not be around for numerous reasons, including needing to work, so it fell on me as the oldest child to take care of my siblings. I did this as best as a child can take care of other children. Growing up all I could think about was how badly I wanted out of my reality, which included being accustomed to drive-by shootings, worrying about loved ones with meth addictions, and living in housing infested with roaches and mice. I just felt incredibly alone and hopeless. Through all of these challenges I learned about my own capacity for resilience and transformation. To resist, I had to learn to cultivate my own hope and a different narrative of our communities and carry this with me in my work with 99Rootz. To resist collectively as a region, we have to plant, nourish, and cultivate our own narratives and hope.”

The scale and concentration of the problems in the Central Valley creates a heightened sense of an absence of community safety and wellbeing. Elected officials and law enforcement in the region maintain power by fabricating a performance of safety through excessive criminalization of the communities that Alicia, Crissy, and the whole 99Rootz team work with. True community safety requires inclusion of people who are the least engaged in decision making – especially youth and women of color, queer, and disabled folks – while also lifting up their power. 99Rootz is shifting the way these communities are viewed and held within the political space in the Central Valley by utilizing a combination of culture and organizing to build community power. 99Rootz is actively creating a future where all people have a say in the decisions that affect their lives; power that truly rests with the people.

This year, youth organizers at 99Rootz are campaigning for safe schools and communities.  The 99Rootz office serves as: a cultural hub for young people to experience and create art;  bases from which to run phone banking and door knocking campaigns; and a resource for political education and voter registration.

Building Youth Power for the Future

“The Central Valley continues to be a political battleground when it comes to hotly contested seats, conservative congressional leadership, and prominent local criminal justice agencies allied with the racist federal administration.”

99Rootz works to change this from the ground up. They are using their collective power – led by young people – to elect decision-makers who have genuine knowledge and an understanding of the communities they work in.

99Rootz builds youth power to train up the next generation of leaders in the values and skills they will need to faithfully govern for all.

As part of 99Rootz’ commitment to providing youth with the skills and resources they need to thrive, they lead a Freedom Summer in partnership with UC Santa Cruz and UC Merced. In the footsteps of the 1964 Freedom Summer where young Black folks travelled to Mississippi to register as many Black people as they could to vote, 25 students from the Central Valley have come back to their hometowns as 99Rootz interns to organize youth in low-income communities. 99Rootz provides knowledge and skills training to support these young people’s voter education and registration drives in their communities. The student interns will also help facilitate 99Rootz Summer Academies for youth of color. The academies include deep training on identity, political education, and campaign planning. As well as an arts and culture track where youth will have opportunities to create art and attend healing workshops.

A Vision for 99Rootz

As Crissy and Alicia deepen the work they are spearheading, their vision for 99Rootz is expansive and rooted in love for community as captured below.

“[99Rootz is] a pathway that amplifies the local talent and resources that already exist in our communities. Young people in the Central Valley are powerful! We are proud to be Black and Brown, we are proud to be immigrants and refugees, and we are thriving. More freedom centers will open up across the valley and more young people of color are going to be in the forefront fighting for justice. I want 99Rootz to be the vehicle youth use to transform our schools, cities, and region. We are going back to the basics, #eachoneteachone, sharing our stories, building our leadership, and taking it to the streets and ballots. The contributions of Hmong refugees, Punjabi immigrants, and Latina farm workers will be acknowledged and represented brightly in community murals, school curriculum, and elected positions. Our Central Valley is full of color, art, and pride. The Central Valley is the HEART of Cali.” – Crissy Gallardo

“I came back to the Valley because although I was talking about social justice work and wanting to create change, I kept finding myself further and further away from those most impacted. By the time I got to Harvard, literally across the continent in one of the most concentrated institutions for power and privilege, I couldn’t lie to myself anymore. Our communities deserve to be healthy by design and free from corporations that seek to profit off our people. My vision is for 99Rootz to help create pathways that are bigger than us, that are unapologetic about where we are from, and that build collective power.” – Alicia Olivarez

The model that 99Rootz leads with is so brilliant because it places the power directly in the hands of young people from the Valley. Youth register other youth to vote in their high schools, they talk to their peers on the phone, and they walk in their own communities talking to their neighbors. What makes 99Rootz work even more impactful is the direct integration of art and culture into organizing. They recognize that this movement is not whole until we start connecting to each other in a new way. That when those in power want us to be quiet we scream louder, when they want us to be still we dance joyously with all our loved ones. 99Rootz is making space for the creativity and joy that comes from art and culture, to surround organizing work in what people truly need to grow and imagine beyond the present. Ultimately, they are leading the way and showing us that it is possible to be woke, dream, and change the power structure at the same time.